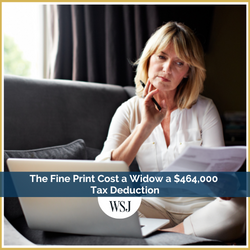 Charitable donors, beware: A widow has lost a $464,000 tax deduction for a gift to a museum because her tax paperwork lacked a few key words.

The recent Tax Court decision in Albrecht v. Commissioner is a fresh reminder of how rigid the standards for charitable deductions often are.

“The rules have become stricter because of abuses, and the IRS is aggressive in enforcing them,” says Lawrence Katzenstein, an attorney with Thompson Coburn in St. Louis who often advises on charitable planning.

Here are the facts in the case. Over the years Martha Albrecht and her husband amassed a large collection of Native American jewelry and artifacts. In late 2014 Ms. Albrecht, by then a widow, donated about 120 items to the Wheelwright Museum of the American Indian in Santa Fe, N.M., a well-known institution.

On her 2014 tax return, Ms. Albrecht claimed a charitable-donation deduction of $463,676 for her gift. Although her income wasn’t large enough to take the entire deduction for 2014, the law allowed her to carry over and use the remainder for five more years. Attached to her return was a five-page Deed of Gift detailing the donation.

Among other things, the deed said the gift was irrevocable and unconditional. However, Ms. Albrecht didn’t have what the law calls a “contemporaneous written acknowledgment” from the museum explicitly saying whether or not she received goods or services in return for her donation.

Bryan Camp, a professor at Texas Tech University’s law school and a noted tax blogger, calls this “the magic language requirement,” although the wording can vary. Even if no goods or services were provided to Ms. Albrecht by the Wheelwright, she needed this statement in hand before filing her tax return to be eligible for a deduction. This requirement has been in the law since 1994, after Congress enacted it to crack down on padded and dubious deductions.

Not having this statement cost Ms. Albrecht her entire deduction, even though the museum later clarified that it provided no goods or services in return for her donation. In his opinion, Court Judge Travis Greaves said he appreciated her good-faith effort to comply, but it didn’t satisfy the law’s strict requirement.

Ms. Albrecht’s attorney, Gregory MacNabb of Plattner, Schneidman, Schneider & Jeffries, said his client declined to comment on the decision and is considering an appeal. Although Mr. MacNabb argued the case in court, he didn’t help plan the donation.

A spokeswoman for the Wheelwright said the museum’s policy is not to discuss matters concerning its private donors.

The bottom line: With charitable deductions, especially large ones, it’s crucial to obey the letter of the law as well as its spirit. The rules are complex because of changes piled on by Congress and the IRS, but the IRS will be looking for missteps and often there’s little room for error.

Here are highlights of current rules. For details, see IRS Publications 526 and 561 on charitable donations.

For donations below $250, the donor can satisfy the rules by having a bank or similar record giving the charity’s name, the date of the gift, and the amount—and a canceled check counts. If the donor has such a record, a receipt from the charity isn’t required, but it’s a good idea.

These donations aren’t subject to “aggregation” rules. So if someone writes a $50 check each week to his church and gives $1,000 annually, this donor typically doesn’t need a receipt from the church to take a deduction—although it will help with an audit.

Cash donations of $250 or more have tighter requirements. The donor needs a statement from the charity giving the amount of the donation and whether the donor received goods or services in return. The charity’s statement must also give the value of the goods or services other than token items that don’t count (like a mug). The donor can only deduct amounts above that.

In addition, donors of $250 or more must have the charity’s acknowledgment in hand before filing a timely return to qualify for a deduction.

The donor must have records showing the name of the charity, the donation site—such as the location of a drop box—and its date and amount, plus the items’ condition. (A photo could help here.) The donor also needs a receipt from the charity, unless this is impractical.

As with cash donations of $250 or more, the donor typically needs a written statement from the charity in hand before filing the tax return saying whether goods or services were provided and if so, their value. Only the amount exceeding that may be deducted.

The charity’s acknowledgment must also describe the donated items, such as “sofa.” But this statement needn’t value the property—that’s up to the taxpayer.

In addition to complying with the rules above, donors must report when they acquired the property and its cost basis on IRS Form 8283.

Other requirements are described on that form and its instructions. Special rules apply to donations of cars, airplanes, and boats worth more than $500.

In addition, the rules may aggregate donations of similar property valued at $500 or more and apply more stringent requirements.

Say an art collector owns three sculptures worth $2,000 each. If she gives one each to three museums, then she would be giving a total of $6,000 and could need an appraisal to deduct a gift above $5,000 as described below.

Donors must follow rules for gifts of property of lesser value, and they may also need to obtain a qualified appraisal and attach it to the tax return.

Even if a taxpayer has the correct proof of a donation, the deduction for it may be limited based on the donor’s income, the type of gift, and the type of charity receiving it.

For 2022, a donor can take a deduction for a gift of cash to a public charity such as a college up to 60% of his or her adjusted gross income. But a gift of appreciated stock to such a charity could be limited to 30% of AGI.

If a deduction is limited due to such rules, the donor often can carry over the extra and use it for up to five years.