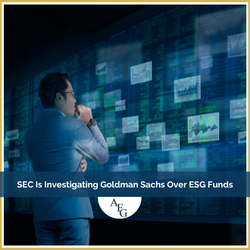 WASHINGTON—The Securities and Exchange Commission is investigating Goldman Sachs GS 2.06%▲ Group Inc.’s asset-management arm over its funds that aim to invest based on environmental, social and governance standards, according to people familiar with the matter.

The SEC’s probe is the latest known instance of regulators’ scrutiny of ESG investing, which has been a boon for asset managers that struggled in recent years to compete with low-fee index funds.

The SEC’s civil investigation is focused on Goldman’s mutual-funds business, the people said, and the firm manages at least four funds that have clean-energy or ESG in their names. The probe could end without formal enforcement action.

Regulators have sometimes expressed concerns that ESG—which doesn’t have a defined regulatory meaning—can be a superficial way to market financial products to shareholders’ desire to address subjects such as climate change or diversity in the workplace.

The SEC last year warned investors that it found some fund holdings “predominated” by companies with low ESG scores, despite the fund manager’s advertised commitment to picking companies that performed well on ESG screening tests. Data vendors such as S&P Global and London Stock Exchange Group’s Refinitiv score public companies on ESG standards, but the grades can vary widely between ratings firms.

Goldman renamed its Blue Chip Fund as the U.S. Equity ESG Fund in June 2020. The fund’s top three holdings—Microsoft Corp., Apple Inc., and Alphabet Inc.—-have remained the same since then, according to regulatory filings. The U.S. Equity ESG fund’s other top holdings currently include Bristol-Myers Squibb Co., Eli Lilly & Co., and JPMorgan Chase & Co., according to its website. It is a relatively small fund, with $17.8 million in assets under management, according to Morningstar data.

Goldman says in regulatory documents that its ESG fund aims to keep 80% of its net assets in stocks issued by companies that meet the fund manager’s criteria. They exclude companies that earn most of their revenue from selling alcohol, tobacco, weapons, coal, oil and gas, and some other products. Goldman says holdings in the U.S. Equity ESG Fund undergo an ESG analysis but reserves the right to invest in some companies without such a screening. It can also invest up to 20% of its net assets in stocks that deviate from its ESG standards.

Goldman also manages ESG-labeled funds focused on international and emerging-markets equities, which are larger than its U.S. fund. It offers several other funds, including exchange-traded funds, that are marketed as “sustainable” or “just” in shareholder documents, according to Morningstar.

Representatives for the SEC and Goldman Sachs declined to comment.

Assets in funds that claim to focus on sustainability or ESG factors reached $2.78 trillion in the first quarter, up from less than $1 trillion two years earlier, according to Morningstar.

The SEC took notice of that growth several years ago and began scrutinizing ESG investing products. It did so through its division of compliance examiners, who don’t issue fines but look for deficiencies that they can forward to the agency’s enforcement attorneys.

In early 2021, the SEC launched an enforcement task force that sifts through public data and tips for potential enforcement cases related to greenwashing—making deceptive or empty claims about environmental or social values—or similar misleading statements related to ESG practices.

The regulator and the Justice Department have been investigating Deutsche Bank AG’s asset-management subsidiary, DWS Group, over claims that the company misled investors about its adherence to ESG criteria. German authorities in May raided the bank’s Frankfurt offices over allegations of greenwashing in its mutual funds. DWS’s chief executive said after the raid that he would resign.

Because the SEC doesn’t yet have rules that dictate what ESG investing means or requires, any enforcement action would need to focus on a fund’s past disclosure, and whether its investing practices materially deviated from what it advertised to shareholders.

The SEC in May fined Bank of New York Mellon Corp.’s investment advisory arm $1.5 million after a regulatory investigation found the firm failed to disclose that some investments didn’t undergo a screening for ESG considerations. BNY Mellon Investment Adviser Inc. had told shareholders that its strategy included “identifying and considering the environmental, social and governance risks, opportunities and issues throughout the research process,” according to the SEC.

In the case of one BNY Mellon fund, 67 of 185 investments didn’t have an ESG-quality score at the time the security was purchased, the SEC alleged. BNY Mellon settled the investigation without admitting or denying misconduct.

Charley Grant contributed to this article.

Write to Dave Michaels at dave.michaels@wsj.com

Appeared in the June 11, 2022, print edition as 'Goldman Faces SEC Scrutiny Over ESG'.

Content in this material is for general information only and not intended to provide specific advice or recommendations for any individual. Investing in mutual funds involves risk, including possible loss of principal. Fund value will fluctuate with market conditions and it may not achieve its investment objective. ?