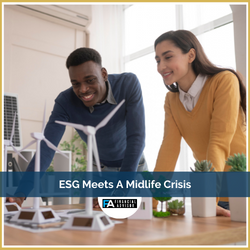 Any movement with this kind of momentum deserves a strong dose of skepticism. However, managers in the space take issue with critics who argue ESG is just a marketing gimmick employed by frustrated active managers.

“There’s an optic around ESG that it is mainly a marketing approach,” says Mike Hunstad, head of quantitative strategies at Northern Trust Asset Management. The reality, in his view, is that “100% of this is client-driven. With European and Australian clients, they demand it. It’s basically table stakes.”

Looking across the asset management landscape, Hunstad says many rivals are struggling to keep up. “Investor demand is driving this,” he says.

The stampede into ESG is spawning a smorgasbord of businesses looking to service the burgeoning industry. At least five ratings agencies are now offering a variety of metrics to help asset managers analyze companies on the characteristics that dovetail with their strategies.

Already there are critics. At a recent press luncheon in April, Loomis Sayles portfolio manager Dave Rolley voiced a question about ESG ratings. Until early March, a leading provider of these ratings, MSCI, assigned a “BBB” rating to Russia and a “CCC” rating to General Motors, despite the auto giant’s hugely ambitious plan to transform itself into a leading producer of environmentally friendly electronic vehicles.

Other ESG raters and money managers have made themselves targets for critics many times before. In 2010, numerous ESG and other socially conscious funds were holding shares of BP, which had promoted itself as a next-generation energy concern even as its Deepwater Horizon well leaked millions of barrels of oil into the Gulf of Mexico.

There is a flip side to the herd mentality building around the popular concept. When too much money chases too few stocks, the resulting imbalances can create value. It shouldn’t be a surprise that value stocks, including those from old industrial smokestack America, are staging a comeback.

In the five quarters since January 1, 2021, energy has been the best-performing of 11 industry groups within the S&P 500. After the oil and gas industry faced a near-death experience following the fracking bust of 2015, Wall Street has demanded capital discipline from these companies, which have been shunned as dogs by most investors and treated as toxic by many politicians.

As Envestnet’s D’Auria noted in an article in Financial Advisor’s September 2021 issue, ESG has yet to be tested over a full market cycle. That’s one reason Northern Trust’s Hunstad has merged his firm’s ESG strategy with a quality, or profitability, component, that has been tested “to outperform over 30 to 50 years.”

In the meantime, as ESG strategies continue to evolve, disputes and intrinsic contradictions are likely to proliferate in ways Friedman and the original Earth Day activists could not have imagined. “It is our fiduciary duty to control ESG [factors], even if you don’t care about morality in investing,” Hunstad says.

Anyone trying to understand how ESG investing got to where it is today might be surprised to find that its origins can be traced to some unexpected places.

In 1970, economist Milton Friedman wrote an article in the New York Times arguing that the primary overarching responsibility of a corporation was to produce profits for its shareholders. In his book Free To Choose, the future Nobel laureate maintained that the singular purpose of pursuing profits was justifiable as long as the company engaged “in open and free competition without deception or fraud.”

Friedman dismissed executives who reasoned their business should have a “social conscience” and take “seriously its responsibilities for providing employment, eliminating discrimination, avoiding pollution and whatever else may be the catchwords of the contemporary crop of reformers. In fact they are—or would be if they or anyone else took them seriously—preaching pure and unadulterated socialism.”

This caustic critique of corporate responsibility nearly coincided with the advent of Earth Day on April 22, 1970. But experts say the “G” (governance) in ESG established itself before the “E” (environmental) component.

After riding a post-World War II economic boom and a 17-year bull market ending in 1966, corporate America grew fat, happy and calcified. Managements were seen as looking after their own interests, not those of shareholders.

Investors gradually became frustrated during the 15-year bear market from 1966 to 1982. As the U.S. economy and equity market stagnated, Friedman’s analysis developed a following. An entire ecosystem of activist investors, arbitrageurs and corporate raiders appeared on the scene eager to profit off the mismanagement of undervalued public companies.

Once derided as rubber stamps displaying feckless support of management, corporate boards started to embrace a stronger sense of fiduciary responsibility beginning in the 1980s. Previous generations of directors often sided with entrenched management teams, but as the decade unfolded, the goal of maximizing value for shareholders ultimately reigned supreme.

With the concept of more aggressive capitalism gaining currency, intensified scrutiny of management led to improved oversight and corporate governance. Institutional investors who had once voted with their feet and dumped shares of badly run businesses began to demand more accountability. By the late 1980s, underperforming companies were being sold in hostile takeovers, and CEOs were getting ousted with regularity.

Today, many veteran asset managers would argue they’ve been using governance criteria as a key investment requirement long before “ESG” was a household word, according to Dana D’Auria, co-chief investment officer at Envestnet. Historical studies have consistently found that companies with stronger balance sheets and higher levels of profitability have outperformed over time.

Depending on whom one talks to these days, ESG is either the first truly unique, innovative concept in the asset management business in the last 30 years or, as Alicia Munnell, director of Boston College’s Center for Retirement Research has said, the latest marketing gimmick of active asset managers desperate for tricks as they fail to keep up with index investing. And there is still a sizable contingent of people who share Friedman’s original critique of corporate responsibility and believe that ESG is simply the latest variant of socialist mush promulgated by limousine lefties.

Whatever your take is, the ability of ESG funds to attract assets has overwhelmed the money management world. A decade-long run in asset-light tech stocks with minimal environmental footprints has fueled the boom—and the performance numbers of many ESG funds and ETFs have been spectacular enough to induce envy among the concept’s critics. This was exacerbated by the pandemic and the work-from-home phenomenon it created.

In the favorable environment of 2020 and 2021, many ESG funds and ETFs managed to outperform a soaring S&P 500, and investors have taken notice.

Content in this material is for general information only and not intended to provide specific advice or recommendations for any individual. All performance referenced is historical and is no guarantee of future results. All indices are unmanaged and may not be invested into directly.

Investing in mutual funds involves risk, including possible loss of principal. Fund value will fluctuate with market conditions and it may not achieve its investment objective.

ETFs trade like stocks, are subject to investment risk, fluctuate in market value, and may trade at prices above or below the ETF's net asset value (NAV). Upon redemption, the value of fund shares may be worth more or less than their original cost. ETFs carry additional risks such as not being diversified, possible trading halts, and index tracking errors.

Any company names noted herein are for educational purposes only and not an indication of trading intent or a solicitation of their products or services. LPL Financial doesn’t provide research on individual equities.